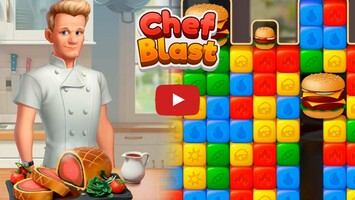 Advertisement
Gordon Ramsay: Chef Blast is a puzzle game in which you can help this world-famous chef in his mission to break all the cubes in each level. It's a colorful game reminiscent of games like Toon Blast or Toy Blast, but food-themed.

In Gordon Ramsay: Chef Blast, your goal is to break enough blocks to complete the goal in each level. For example, you might have to destroy ten yellow blocks or ten blues ones. Breaking blocks is easy: just tap on groups of two or more of the same block that are touching each other. That being said, you'll have to think carefully to complete the goal before you run out of moves.

There's more than just breaking blocks in Gordon Ramsay: Chef Blast. In some levels, you might have to eliminate all the onions on the screen by breaking adjacent blocks or move hamburgers from the top to the bottom of the screen. These goals will be very familiar to Candy Crush fans, but this time everything revolves around food.

Gordon Ramsay: Chef Blast is an entertaining puzzle game that features the popular TV chef. On top of that, it has loads of levels that are regularly updated, so the fun never ends.
Reviewed by Nelson de Benito Translated by Jasmine
Advertisement

Farm Heroes Saga
A lot like Candy Crush Saga, but with colored fruit!
Slug it Out!
Puzzles and slugs, all in one game
Brain Out
Surprising levels that will test your logic and creativity skills
Where's My Water?
Give this poor crocodile some water
Comics Bob
Help the girl and the caveman
Sand Balls
Direct all the balls toward the van
Tile Fun
Match tiles to clear the board
Candy Crush Jelly Saga
The classic Candy Crush, now with gummies

Impostor
Find the impostor
Build Roads
Rebuild the streets of your city in this fun arcade game
Empires and Allies
Build your base and lead your army to victory
FarmVille: Tropic Escape
The FarmVille you know and love, now on a tropical island
Looney Tunes World of Mayhem
The zaniest Looney Tunes game on Android
Helix Jump
Test your skills in this tricky vertical labyrinth
Duplo World
Learn numbers, shapes and other concepts alongside the LEGO characters
Franchise Football 2021